New Arrivals: SHOP HERE
SAUNA IS FROM FINLAND
LEARN MORE
SAUNA IS FROM FINLAND
Did you know that "sauna" is the only commonly used Finnish word in the English language? However, most English speakers pronounce it incorrectly. In Finnish, every syllable is pronounced and the first takes emphasis. Broken into syllables, sauna would be pronounced "SA-oo-na." When said fast in English, it should sound like "sow-na" instead of "saw-na," as many English speakers say. 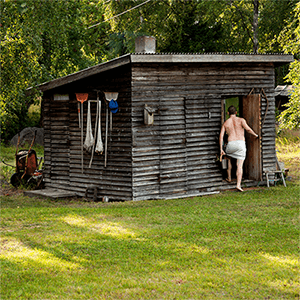 The birth of saunas is attributed to Finland, and it remains a large part of Finnish culture. The bathing ritual has been performed for thousands of years in Finland, back when settlers would dig ditches in the ground with a heated pile of stones. When water is poured on these stones to give off vapor, it is known as "loyly." Women would give birth in the saunas because of the bacteria-resistant soot. The sauna was also a place for purification rituals before marriage and after death, as well as place for healing the ill.


Saunas Today
Today, sauna is just as sacred and essential for body and mind. The benefits range from stress and pain relief to deep cleansing of toxins and calorie burning. A bunch of birch leaves called "vihta" are sometimes used to lightly whip the skin, improving circulation. There are cultural customs associated with sauna etiquette. Men and women sauna separately, unless they are family. Sauna should be taken after a shower and fully naked, even with family, friends and coworkers. Since sauna has no sexual aspect, the nudity is meant to be healthy, not uncomfortable. The normalcy of nudity makes everyone feel comfortable and equal, and exposes young ones to what real bodies look like as opposed to media representation. Phones and other distractions stay out, and while it is usually too hot for conversation, topics like work and religion are off the table.

With three million saunas for the five million inhabitants, there is an average of one sauna per household. 99% of Finns will take at least one sauna a week. It is thought of not as a luxury, but a necessity. This includes wooden saunas, which are the most traditional. Wood is burned in a stove inside the sauna and ladles of water are tossed onto the rocks above it. The most common household sauna in Finland is the electric, where rocks are heated by an electric stove for a dryer heat. Lastly is the smoke sauna, which are rare but have somewhat of a cult following for the soft steam it produces. No longer made because of the risk of burning and lengthy heating process, they don't use chimneys, but the black smoke is ventilated out and the heat left in the heater is what keeps the sauna warm.

Though a hot sauna may seem counterintuitive to take a hot sauna on a summer day, sauna is a big part of Finland's summer cottage life. Most Finns have a cabin, and most of those have sauna. It is tradition to go from sauna to lake and back again. This practice is also done in winter, when the lake is icy cold for a breathtaking and invigorating experience.

Photo: Harri Tarvainen
ADDITIONAL ENTRY
1 ADDITIONAL ENTRY
*By entering your email address you are subscribing to the FinnStyle email list. You can unsubscribe at anytime.